How Old Can Canned Food Be Safe? 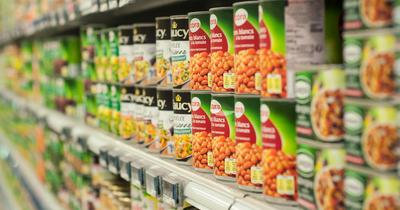 For families who put a lot of time into storing food and maintaining a stockpile, it is very important that that food will last a long time. The goal of most homesteaders and preppers is to be self-sustaining for decades to come, which means having plenty of food to eat. This means that canned goods need to last 40, 50, or even 60 years without going bad.

Canned goods that have been sitting around for decades can still be safe to eat as long as there is no damage to the can. Whether old canned food is safe or not also depends on what the food is. For example, canned fruit is likely safe to eat, but canned meats are not.

Most canned goods have a “best by” date on them. This does not actually refer to when the food goes bad, rather it describes when the food is no longer at peak quality. Old canned goods that are past their “best by” date are not inherently unsafe or guaranteed to make you sick. They have probably lost some of their flavor and will not taste as good as if they were fresh.

Sources include the U.S. Food Safety and Inspection Service, the U.S. Department of Agriculture, The Provident Preppers, and the Sioux City Journal.

In some cases, 100 year old canned food can be safe to eat. It all comes down to what the food is, how it was preserved, and the environment that it was stored in. There are 2 notable case studies in which canned food from over 100 years ago was recovered and deemed safe to eat.

The first case is the Bertrand steamboat. In March of 1865, the Bertrand was carrying 50-60 passengers and 400 tons of cargo from St. Louis to Montana. The steamboat sank in the Missouri River after hitting a log; the ship went down quickly, taking all the cargo and the passengers’ belongings with it. No one was killed or injured when the boat sank, but they did lose everything they had.

The Bertrand was buried under 30 feet of sand, mud, and silt for 102 years until it was salvaged in 1968. When the ship went down, it was carrying canned goods containing mixed veggies, tomatoes, honey, oysters, and peaches. In 1974, the National Food Processor Association tested the cans recovered from the Bertrand. The tests revealed that there was no evidence of bacteria, mold, or other spoilage for the canned food, but that the smell, taste, and consistency had declined considerably.

The canned food aboard the Bertrand shows that 100 year old canned food can still be safe to eat, it just will not taste nearly as good. In this case, it was beneficial that the food aboard the Bertrand was buried in cool mud for 100 years. Canned goods are able to stay safe for longer when they are stored in a cool, dark environment. If the cans had been exposed to heat and bright sun for those 100 years, they might not be as safe to eat.

Excavations of the tombs in Egypt have revealed that the pharaohs and other nobles were buried with a large number of snacks to help sustain them in the afterlife. Some of these snacks included barrels of wine, ancient cheese, jars of honey, sugar, spices like salt, and rice. Out of these ancient provisions, only the honey, sugar, salt, and rice remain edible over 2,000 years later.

Honey, sugar, and salt can last forever and be safe to eat if stored in the proper conditions. While they may lose their taste over time, eating honey, salt, or sugar from an Egyptian tomb will probably not make you sick. For these goods to stay food safe, they need to be in a dark, cool, low humidity environment. The tombs in the Egyptian desert provided the perfect environment to keep them preserved.

Rice is also very long lasting if stored properly. If rice is kept in a cool, low humidity environment, it can be safe to eat over 100 years later.

How to Tell if Old Food is Safe to Eat

According to the U.S. Food Safety and Inspection Service, “shelf stable” food is defined as non-perishable goods that can be stored on a shelf long-term even after opening. Some canned food is not shelf stable because it needs to be refrigerated after opening. Canned seafood like tuna and canned meats fall into this category.

Whether old food is safe to eat will depend on a few factors. Before you eat any food from old cans, run through this checklist to see if it is safe.

The can is unopened and still sealed

The process of canning preserves food by destroying microorganisms that will cause the food to spoil and creating a vacuum seal to prevent new bacteria from getting in. The food in the can will be safe as long as the vacuum seal is intact.

However, if you find a can that looks like it has been opened at some point in time, it is probably no longer safe to eat. Even if the food inside looks okay, there is a high chance that the food has already been exposed to oxygen and new bacteria.

Commercially canned items will normally have a type of sticker that wraps over the top of the can. The sticker will show if the can has been opened previously. If you can items at home, it may be beneficial to put your own sticker, marking, or piece of tape over the top of the lid. This way, you will be able to tell instantly if the can was previously opened and if it is still safe to eat.

What type of food is in the can?

When determining if an old can is safe to eat, it matters very much what the food is in the can. For example, canned meats and seafood are not safe to eat if stored for a long time. Most canned meats have a shelf life of 2 to 5 years. This is because the proteins in the food will begin to break down over time; acids in the food may also begin to react with the can, which will cause changes to the food’s texture. Additionally, the presence of sulfur and phosphorus in the can will cause the meat or seafood to deteriorate after 5 years.

On the other hand, foods like veggies, fruit, beans, and dried grains can be safer to eat for far longer. Certain types of grains like beans and rice will never go bad as long as they are stored in a dry environment. Certain vegetables with high acidity, such as tomatoes, will not last as long as non-acidic foods. Like canned meat, canned tomatoes will begin to break down over time and the acid will react with the inside of the can.

What state is the can in?

Another good way to determine if 100 year old canned food is safe to eat is to look at the can. If the can is rusted, dented, broken, bulging, or leaking, the food inside will not be safe to eat. When a can is bulging, that is a sign that the food inside has spoiled due to improper storage or overfilling. It can also be an indicator that bacteria has gotten inside the can.

Canned food should also be thrown away if the can is dented or rusted. These flaws may seem cosmetic, but they are an indication that the structural integrity of the can has been compromised. The damage to the can may have caused the vacuum seal to be broken, which could allow bacteria to get inside.

Where was the food stored?

If you find yourself holding a can of 100 year old food, you may not know exactly where it has come from. In the case of the food from the Bertrand shipwreck and the Egyptian tomb, it was very clear that the cans had been sitting in a cool, dark riverbed or a cool, dry tomb for a long time. However, if you can’t verify where the cans have been stored for the last few decades, it may be best not to eat the food inside.

Generally, canned food and dry goods last the longest when they are stored in a cool, dark, and dry place. The best place for storing cans long term is in a food cellar or in a pantry that is far away from both the fridge and the stove.