Rice Botulism: What It Is & How To Protect Against It 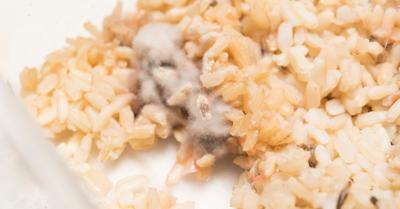 You are probably storing leftover rice wrong. Rice botulism is a type of food poisoning that you can get from improperly stored cooked rice.

Food poisoning is a highly unpleasant experience that can be sudden and challenging to prevent. Everyone knows not to eat meat that has been left out for a long time, but did you know that leftover rice can also make you ill? If you like to meal prep or batch prep meals for your large family, it is important to know how to properly store rice to prevent illness.

Rice botulism occurs when rice is cooked then left at room temperature for a long period of time. Spores of Bacillus cereus are normally present in uncooked rice, but they will grow and produce toxins if the rice is left unrefrigerated. Rice botulism can cause sickness, vomiting, and diarrhea.

Reheating leftover rice in the microwave or on the stove is not enough to kill the Bacillus cereus spores and will not protect you or your family from rice botulism. The best way to avoid getting food poisoning from leftover rice is to rapidly cool off the rice and put it into the fridge within an hour. It is also recommended that you eat your leftover rice within 1-3 days after making it, and don’t reheat rice multiple times.

Sources on rice botulism and how to protect against it include the NHS, the Frontiers in Microbiology journal, Mashed, the Mayo Clinic, Live Science, and McGill University’s Office for Science and Society.

Botulism is a serious condition that is often lumped in with food poisoning. Foodborne botulism occurs when the bacteria Clostridium botulinum begins to grow in food. Botulism can occur in home canned foods where there is very little oxygen. When the bacteria grows in your food, it produces a toxin that can make you sick.

Botulism is relatively rare with fewer than 1,000 cases every year in the U.S.. It is possible for bolutlism to be fatal, but with early diagnosis and care, it can be treated by a doctor and resolved within 1-3 weeks.

Rice botulism is very similar to the type of botulism that can occur in other bacteria infested foods. Uncooked rice normally contains spores of Bacillus cereus, which is not killed when the rice is cooked. In most cases, these small spores are not a big deal and rarely make people sick. Most people are able to eat rice with their dinner, and their digestive system can easily handle the few spores, so that they do not get sick.

However, those spores in rice may become a problem and cause rice botulism depending on how rice is stored. If you leave rice at room temperature after cooking it, the bacteria spores will rapidly grow and duplicate. When the bacteria duplicates, it begins to produce the botulism toxin which could make you sick.

What Are the Symptoms of Rice Botulism?

If you get rice botulism, you may not even know that you have it. The symptoms are very similar to other types of food poisoning. It is very common for people to feel sick from rice botulism and assume that it was the supermarket sushi, leftover salmon for lunch, or an omelet from eggs that had gone bad.

The good news is that the symptoms of botulism from rice are relatively short lived. Within 1-5 hours of eating the bad rice, you may begin to feel nauseous and experience cramping. It is also common to experience diarrhea and vomiting after eating contaminated rice.

Compared to other forms of foodborne botulism, rice botulism is less dangerous and less of a health risk. It is normal for symptoms to subside within 24 hours; this botulism has roughly the same timeline as the common flu.

How Do You Treat Food Poisoning From Rice?

There is no real cure for food poisoning in general. If you get sick from eating leftover rice, the best thing you can do for your health is to stay hydrated and rest. Rice botulism is very rarely serious enough to warrant medical attention. The worse case scenario is that you become severely dehydrated from the sickness and require your doctor to give you an IV with fluids.

How Common is Rice Botulism?

If you previously had no idea that rice could cause food sickness, you’re probably wondering why you’ve never heard of this before. Rice botulism is also colloquially called “fried rice syndrome.” It is very common for people to get rice botulism and dismiss it as food poisoning from another cause, or to assume that they just have an upset tummy.

A 2019 study published in the Frontiers in Microbiology estimated that there are 63,000 cases of sickness each year caused by Bacillus cereus in rice. However, cases are often unreported and misdiagnosed because they do not present as severe symptoms.

How to Prevent Rice Botulism

The first step to preventing rice botulism is to understand what causes the rice to make you sick. A normal amount of the bacteria Bacillus cereus is not harmful in rice. If all the rice is consumed soon after cooking, there is no health risk. The problem is that the bacteria will grow and secrete toxins if left at room temperature for more than an hour.

The key to preventing rice botulism from leftovers is to rapidly cool down your leftover rice and place it in the fridge within an hour of cooking it.

There are 2 different ways to do this. If you do not plan to eat the leftover rice within the next few days, it is best to place your container of rice directly into the freezer after serving it. This will lower the temperature rapidly enough to prevent the bacteria from producing toxins. Rice can last up to 1 month in the freezer while still retaining its moisture and flavor.

If you plan to eat the leftovers the next day, you should transfer your rice into a shallow dish and place it in the fridge. A shallow dish has more surface area for the rice than a tall dish, so it will become colder faster.

In addition to storing rice properly to prevent food sickness, here are 5 other things you can do to keep yourself and your family safe:

Merely reheating rice will not prevent rice botulism. In this way, rice is not like meat. If you don’t cook meat properly, it can make you sick. In the case of rice, it isn’t the cooking that mitigates the food poisoning risks, it comes down to how the rice is stored.

The Bacillus cereus bacteria naturally found in rice is very hardy to a wide range of temperatures. Neither boiling nor freezing is enough to kill it off. On its own, the bacteria is not harmful. When the bacteria multiplies and makes toxins, that is when it becomes a health risk.

The best thing you can do when you keep rice as leftovers is to minimize how often the rice is at room temperature. The bacteria thrives best between 40 and 140 degrees. This means that it is best to keep your rice in the fridge until it is time to eat it, then to warm it up until the rice is steaming.

How Do I Meal Prep with Rice Safely?

Rice is a staple for most people who prep their meals at the beginning of the weeks. Meals like rice and chicken, rice and beans, and rice in burrito bowls are popular among fitness enthusiasts and bodybuilders. The risk of rice botulism shouldn’t prevent you from meal prepping with rice.

There are a few ways to meal prep safely to avoid getting rice botulism: